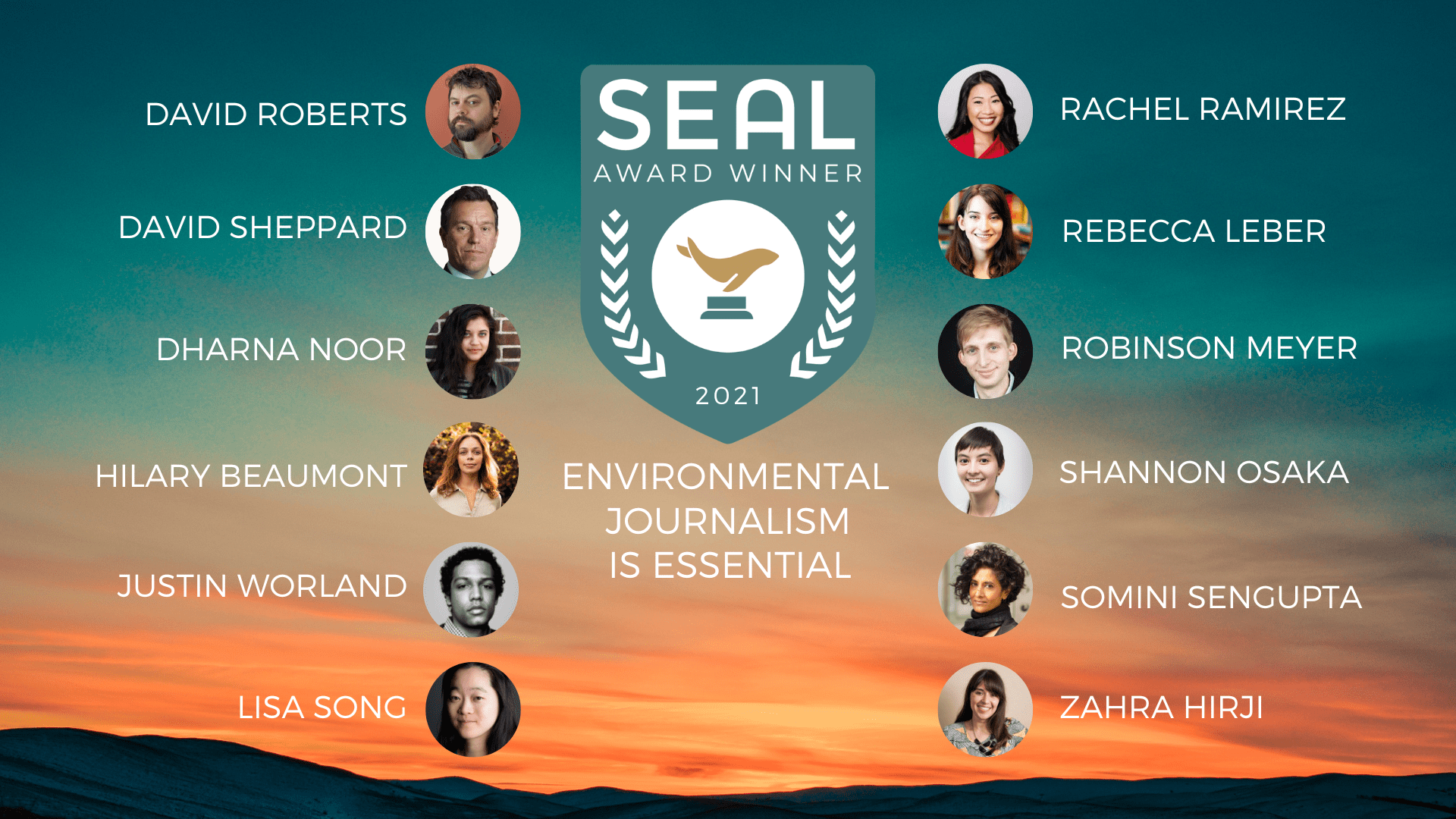 Posted at 06:00h in Uncategorized by Matt Harney
Share

June 21, 2022 – As fossil fuel dependence continues to shape our geopolitical landscape and climate change becomes a lived reality instead of a hypothetical future outcome, twelve journalists have been awarded a 2021 SEAL Environmental Journalism Award in recognition of their efforts to bring environmental news and analysis into the public discourse, and to elevate our understanding of the connections between complex current events.

Honorees include five repeat winners: Justin Worland of TIME; Rebecca Leber, who writes for Vox and Mother Jones; Robinson Meyer of The Atlantic; Shannon Osaka of Grist; and Dave Roberts, formerly of Vox and now self-publishing under the Substack Volts.

Of particular interest among this year’s winners, SEAL Awards wishes to highlight the work of David Sheppard for his powerful data visualization coupled with reporting that connected the dots between Europe’s dependence on Russian oil and gas and the emerging conflict in Ukraine, in articles published several months before Russian tanks rolled across Ukraine’s borders. And for the third year running, SEAL Awards is thrilled to feature a journalist who has successfully launched an independent publication. Through his work published in Volts, Dave Roberts continues to direct his keen analysis to the intersection of climate change, the economy, and social justice using mixed media reporting.

The 2021 SEAL Environmental Journalism Awards were chaired by Hala Kilani, Senior Communications Officer for Climate Action Network International. Ms. Kilani’s previous work included serving as a Public Engagement Director at the United Nations Framework Convention on Climate Change during the 18th Session of Parties (COP18) and the Meeting of Parties (CMP8) to the Kyoto Protocol, and she served as the Poverty, Equity and Gender Program Coordinator at the International Union for the Conservation of Nature. Prior to shifting her work to focus on the environment, Ms. Kilani worked as a journalist herself, and her reporting on the Arab Spring was featured in The Guardian.

Winners were selected based on a panel review of each journalist’s work, data-driven analysis of the impact and reach of their articles, and consideration for writers who are bringing fresh perspectives and social relevance to environmental issues. Looking back at 2021, SEAL Awards continues to emphasize and celebrate the professionals who pioneer new media platforms and build partnerships between news outlets and colleagues in the field of environmental journalism.

Question: How Do I Apply For A SEAL Environmental Journalism Award?

Answer: Given our ambition to recognize the top twelve journalists globally, the SEAL Environmental Journalism Award is conducted without an application or submission process. Instead, the SEAL panel considers ALL journalists covering environmental topics – this is possible through our year-round content curation program (chaired by Safa Bee) where we seek to amplify on exemplary work on our @SEALAwards Twitter feed. However, we do accept public nominations through this form.

Question: How Do I Nominate My Favorite Journalist For A SEAL Environmental Journalism Award?

Answer: We do accept nominations through this form.

Question: I Am Not A Traditional Journalist – Instead I Produce a Podcast and/or Video Series – Am I Eligible For A SEAL Award?

Answer: Potentially. We understand the media environment is constantly changing. SEAL would also like to celebrate those elevating public awareness on environmental issues, regardless of medium. As such, we will increasingly consider non-written forms of environmental coverage in our award process.

Question: I Care Passionately About The Environment. How Can I Help Support These Environmental Journalists?

Answer: The best way to support environmental journalists is to support their organization, either through a subscription or a donation. Secondarily, supporting their works on social media – whether shares on Facebook or retweets on Twitter – can help amplify their message and show their editors/organizations this content is valued.

The SEAL Awards core pillars are: