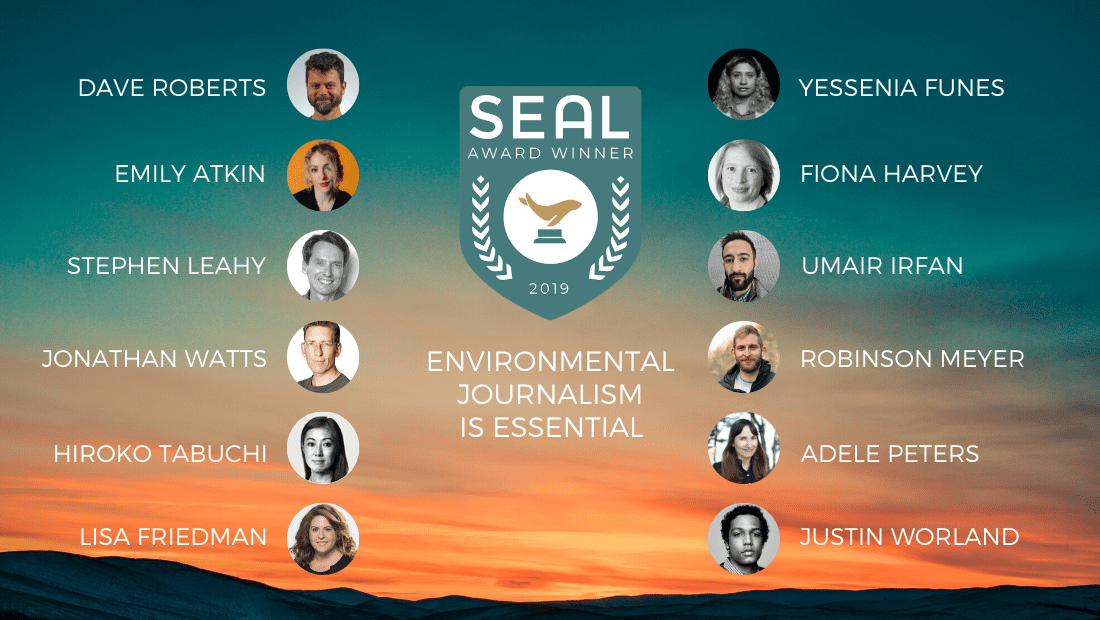 Posted at 19:57h in Uncategorized by Matt Harney
Share

February 13, 2020 – With our environmental crisis an existential societal issue, twelve journalists have been awarded a 2019 SEAL Environmental Journalism Award, celebrating their work in documenting climate change impacts and solutions.

“We owe a debt of gratitude to environmental journalists, who investigate matters the powerful would prefer to keep hidden, translate complex scientific information into tangible stories the public can relate to, and dedicate their careers to an underappreciated, underfunded, and often dangerous field,” commented awards chairperson Dr. Jonathan Foley, Execute Director of Project Drawdown. “The journalists celebrated by SEAL Awards know what so many of us have been slow to grasp: that climate change, pollution, and mass extinctions pose an unprecedented threat to human civilization. Thanks in large part to their talent and effort, we have reached a cultural tipping point where climate change and the environment are no longer a concern solely among scientists and activists, but have grown to become a mainstream topic of discussion and lens through which we evaluate our lifestyle, consumer habits, and even our political leaders.”

Winners were selected based on a panel review of each journalist’s work, data-driven analysis of the impact and reach of their articles, and consideration for writers who are bringing fresh perspectives and social relevance to environmental issues.

Our core beliefs maintain that our environmental progress requires true leadership, leadership deserves recognition, and recognition is a form of accountability.

The SEAL Awards organizational pillars are: