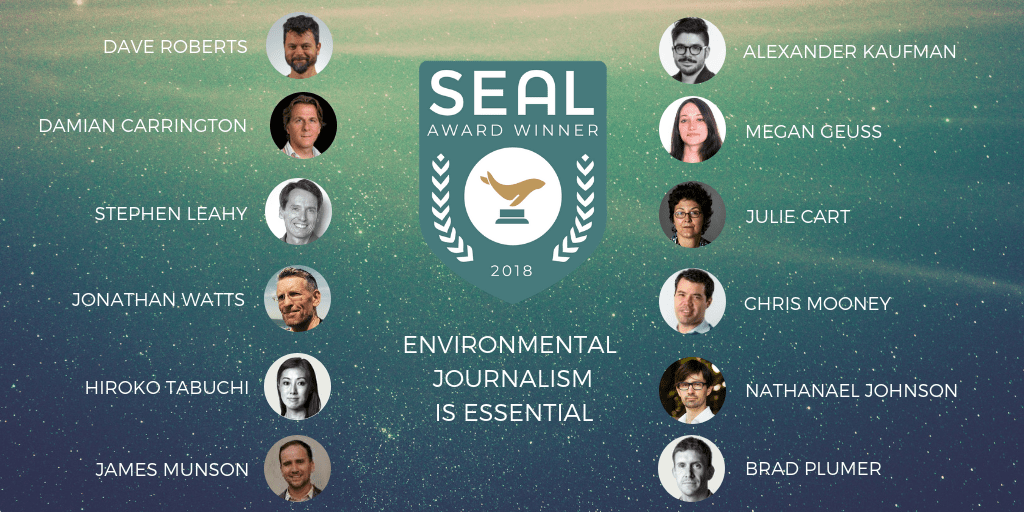 Posted at 08:00h in Press by Matt Harney
Share

November 12, 2018 – With our environmental crisis an existential societal issue, twelve journalists have been awarded a 2018 SEAL Environmental Journalism Award, celebrating their work in documenting climate change impacts and solutions.

“Like never before in history, journalism and journalists are expected to act and shape the global narrative in a world that we need to develop, protect and respect,” commented awards chairperson Sasja Beslik, Head of Group Sustainable Finance at Nordea. “The free speech and basic democratic rights are under huge pressure across the world. Supporting thorough, fact-based journalism is not only necessary it is an obligation for any democratic society in the world.”

“Environmental journalism matters now more than ever,” added Matt Harney, Founder of the SEAL Awards. “Our own research has shown how challenging it is to get the public to pay attention to environmental issues. Environmental journalists’ hard work of translating complex scientific research and policy developments into digestible writing is grossly under-appreciated. This needs to change. We want to reward journalistic excellence and leadership and encourage even more coverage of climate change.”

With all writers covering the environment eligible and under consideration, winners were selected based on a panel review of each author’s work, peer nominations, and were chosen based on alignment with timely environmental topics and issues. The 2018 SEAL Environmental Journalism Awards were chaired by Sasja Beslik, Head of Group Sustainable Finance at Nordea and an internationally recognized sustainability thought leader.

You will ONLY receive email notifications regarding the 2019 award announcement.

The SEAL (Sustainability, Environmental Achievement & Leadership) Awards launched in 2017 and is an awards-driven environmental advocacy organization.

Our core beliefs maintain that environmental progress requires leadership, leadership deserves recognition, and recognition is a form of accountability.