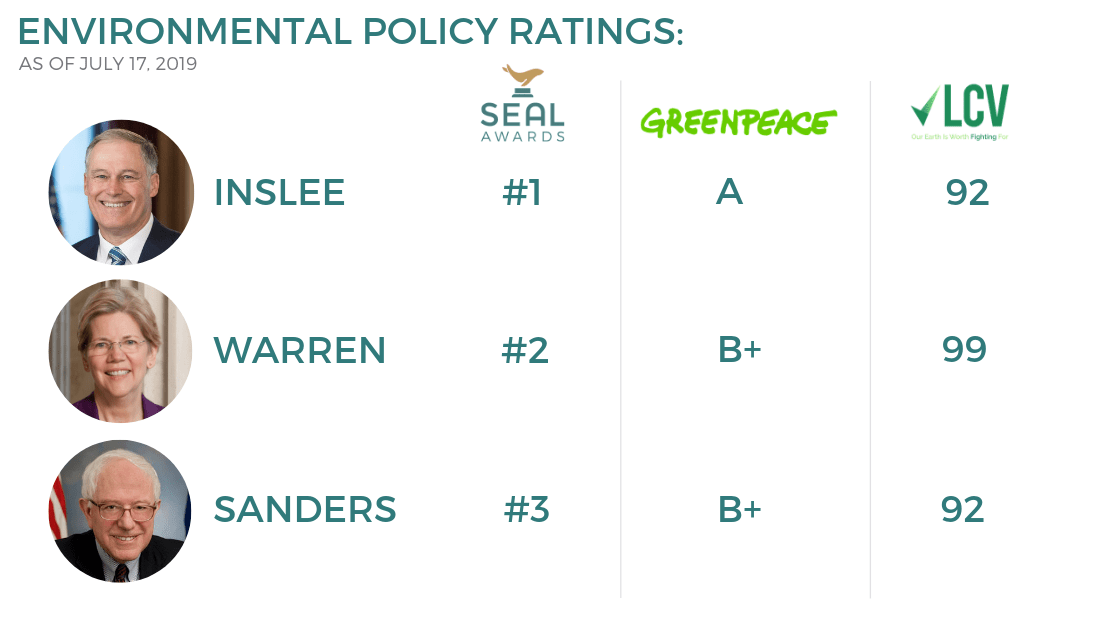 Posted at 09:00h in Press by Matt Harney
Share

July 17, 2019 – Believing the climate crisis requires an immediate and ambitious response, SEAL Awards has evaluated the 2020 US Presidential candidates on the basis of their environmental platforms, and today announces three finalists for the SEAL Awards 2020 Environmental Policy Endorsement:

“The escalating climate crisis poses an existential threat to modern society, so we must consider the impact each potential candidate would have on the environment as the keystone issue in this campaign. Without ambitious and immediate leadership to reverse the effects of climate change, the foundations of our economy, social welfare, and international relations will all face significant adverse effects. To echo Professor Michael Mann, ‘we need a world-war type mobilization’ to address our climate crisis.” –Safa Bee, Impact Lead for SEAL Awards

Importantly, this endorsement is solely focused on each candidates’ environmental policies as opposed to their overall candidacy.

SEAL Awards believes the goal should be for the best aspects of each candidates’ approach to inform the policies championed at all levels of government, with initiative taken from local to international level, irrespective of who prevails in the 2020 Presidential campaign.

“Defeating the climate crisis must be the top priority of the next administration. It is not just one issue, but rather the lens through which we must be viewing every issue, from the economy to national defense to health care and immigration. I am grateful that SEAL Awards has acknowledged the importance of the next administration defeating the climate crisis, and I am proud to receive their endorsement.” –Governor Jay Inslee

With all presidential candidates under consideration, the platform and policy track record of each candidate was assessed using five key points of impact, drawn from thought leadership including guidelines published by the Intergovernmental Panel on Climate Change (IPCC).

The five specific areas SEAL Awards chose to focus on were:

Further consideration was given to each candidate’s demonstrated ability to:

“The beginnings of drastically escalating climate chaos across the globe have thrown us on a path where ‘change’ will become the only constant. In this context, it is essential to look at candidates from a holistic angle. Candidates who have demonstrated extraordinary compassion and bravery to take up just but unpopular causes have already demonstrated their profound readiness for the ultimate leadership mantle.” -Taimur Malik, Climate Activist & Thought Leader

SELECTED ENDORSEMENT RATIONALES
1st – JAY INSLEE: “The candidate that has done the best job is Inslee, who spoke about tackling climate change from a technological standpoint but who also mentioned climate justice as an important issue.” –Alejandra Echeverri, Ph.D. Candidate at the Institute For Resources, Environment, and Sustainability

3rd – BERNIE SANDERS: Sanders does the best job of approaching climate change holistically because he understands the scientific issues but also the economic and social causes and consequences behind it.” –Youth Activist Advisor

ADDITIONAL ADVISOR PERSPECTIVES
“There can be no compromise on climate action, putting the hard decisions off any longer will only cause more severe consequences.” –Owen Bidder, Post-Doctoral Fellow, UC Berkeley

“Recognizing the scientific evidence behind climate change is not enough, we need a president who will act now to create policies that will protect the rights of all people.” –Olivia Blondheim, EarthEcho International

“Climate change is potentially the biggest existential threat to us, and all humans, and it is in our power, as Americans, to mitigate the worst of its effects. The wealthy will not suffer like the poor. We must protect our vulnerable.” –Holly Peterson, Professor at the School of Public Policy, Oregon State University

“It is incredibly important that when a candidate is talking about sustainability and climate change, that they’re also discussing the need for climate risk management and resilience both locally and globally. We need to elect a candidate who is committed to preparedness and resilience funding and ensuring that we are better prepared to anticipate, respond, and thrive in the face of the climate shocks and stressors coming our way.” –Emily Wasley, Director of Corporate Sustainability and Climate Resilience at The Cadmus Group

SIGNALING THE IMPORTANCE OF CLIMATE CHANGE
It is the opinion of SEAL Awards that this season’s Democratic primary is shaping the national political conversation, and we have a clear need to keep those candidates in the debate who are shaping political dialogue for the better. Campaign donations are a tool to demonstrate whose ideas you want to see more of. It’s not only the amount that counts, but the number of individual donors is a key factor in determining whether a candidate will be invited to the debate stage.

For that reason, SEAL Awards advocates making donations in any amount to the Inslee, Warren, and Sanders campaigns as a means of signaling the importance of keeping candidates in the debate who take seriously the conversation about climate change.

Additionally, SEAL Awards recommends including a message with each donation letting the candidates know that you are donating in support of their continued discussion of climate change.

*Note: Five of our advisors for this project requested anonymity, as they currently receive federal funding for their research and they are concerned about jeopardizing their work.

Note: “Best Candidates For Climate Change” Summary Scorecard: Greenpeace and League of Conservation Voters (LCV) have no affiliation with SEAL nor provided any input with respect to this environmental policy endorsement. Further, the LCV scores presented reflect lifetime ratings for each candidate. Warren’s 2018 LCV rating is 100. Sanders’ 2018 LCV rating is also 100. Inslee did not receive a 2018 rating from LCV.

Our core beliefs maintain that our environmental progress requires true leadership, leadership deserves recognition, and recognition is a form of accountability.

The SEAL Awards organizational pillars are: